There will be an meeting at the Lincoln Town Hall on June 10 at 7:00 pm and the Valentine Whitman House will be discussed.   The town of Lincoln currently owns this rare and historic stone ender, the site of the first town meeting in Smithfield.  Preserve RI has developed two proposals to preserve the house, in both cases the Town may give up ownership.

Please stop by to find out more.

Ranger Kevin Klyberg, from the Blackstone River Valley National Historic Park, will give the BVHS’s annual Christine Nowak Lecture in the Park, at the barn of the Captain Wilbur Kelly House Museum, 1075 Lower River Road, Lincoln, RI. The talk, “Blackstone Canal: Highway to the Headwaters, will take place at 2:00 p.m, immediately after the BVHS annual meeting. There will be a shuttle to take people from the small parking lot to the barn.

This lecture is free. Please join us at the Kelly Barn on Sunday, May 19.

Live at North Gate: Concert by Michael DiMucci on April 28

On April 28 at 3:00 pm, tenor Michael DiMucci will be at North Gate with a program on music from the 1950s and 1960’s. This concert will be the 3rd part of his Americana series.

The concert celebrates historical music from Doo-wop to Folk to the early beginnings of Motown and early rock & roll.

Tickets are available at BrownPaperTickets.com (click on the graphic below), and we will also be selling them at the door.  Tickets will be cash and check only at the door.  For questions, please email bvhsri@gmail.com or call Jason at 401-862-4202.

To buy tickets online, click on this link or on the graphic!  BrownPaperTickets.com: https://www.brownpapertickets.com/event/4105521

Michael DiMucci studied piano with the late Chester Fruscione of Trenton, New Jersey and further at the Westminster Conservatory of Music in Princeton, NJ where he also studied pipe organ. Mr. DiMucci has played at several RI venues for special events as well as his own concerts and recitals such as Linden Place, Blithewold Mansion, Mount Hope Farm, The Dunes Club and others. As a singer, Mr. DiMucci apprenticed at Boheme Opera in Trenton, NJ for two seasons with
Maestro Joseph Pucciatti and studied voice with RI baritone and Artistic Director of Opera Providence, Rene de la Garza. He has performed throughout the New England area in large and small venues for concerts, private recitals, special events and weddings and was a regular guest artist at the University of Rhode Island’s Opera Workshop. There Mr. DiMucci performed many lead tenor
roles including Tamino in The Magic Flute; Nanki-Poo in the Mikado; Ralph Rackstraw in H.M.S. Pinafore; Rinuccio in Gianni Schicchi and Matt/Larry in Face On The Barroom Floor. Mr. DiMucci has also performed in concerts and recitals for Opera Providence as a guest singer. He has performed with the RI Philharmonic as a guest soloist and been a part of a large concert series for the
Town of Bristol, RI annually. Because of his diverse musical background, Michael is at home singing Broadway/Musical Theatre, Opera, classical literature, as well as jazz and the American Songbook.

He has recorded two studio albums, “O Holy Night” — a classical and secular Christmas album and his second CD, “Impossible Dream” contains Broadway and classical crossover and Italian selections including the work of RI composer Dr. Enrico Garzilli.  In addition to his studio albums, Michael has several live recordings and demos to his credit. Michael 2013 recording: “PRIMAVERA: Michael DiMucci Live” is currently available for download and features several original compositions by Mr. DiMucci. Michael’s new album is currently in
development and scheduled for release in Early Fall 2019.

Michael DiMucci is co-owner of an Art, Music and Beauty Studio, One Studio SMOOCH in Cranston, RI with Jenny DiMucci where he teaches art class, as well as piano and voice lessons throughout the week. Michael currently resides in Western Cranston, RI with his wife, Jenny, and sons, Nevan and Remy.

Danny Bethel is returning to North Gate with a fascinating exhibit of his Lime Rock collection.  Bethel has been collecting photos, documents, post cards, and other ephemera relating to Lime Rock for 15 years.  Featured in this exhibit: the Lime Quarry, the Lime Rock Fire Department, the Lime Rock Baptist Church, the Smithfield Lime Rock Bank, the Lime Rock School House, Mount Moriah Lodge, and the Louisquisett Pike.  Among the items on display will be a document about a 19th century business arrangement regarding purchasing wood from a wood lot for the lime kilns. There will be photographs of Eddie Dowling and his wife Rachel (Ray) Dooley, and a program from The Glass Menagerie when Eddie Dowling was in the cast. (Rt. 146 was named after Eddie Dowling, an actor and producer born in Woonsocket.).  Another interesting piece of ephemera in the exhibit is a church bulletin from  the Lime Rock Baptist church that mentions fixing the roof after the hurricane of 1938.

On April 28 at 3:00 pm, tenor Michael DiMucci will be at North Gate with a program on music from the 1950s and 1960’s. This concert will be the 3rd part of his Americana series.  Tickets are available at BrownPaperTickets.com (click on the graphic below), and we will also be selling them at the door.  Click on this link or on the graphic! BrownPaperTickets.com: https://www.brownpapertickets.com/event/4105521 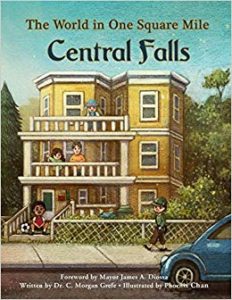 Morgan Grefe from the R. I. Historical Society will talk about her children’s book, “The World in One Square Mile: Central Falls,” an illustrated history told from the viewpoints of immigrant children in periods ranging from 1700 to 2006. Free, all welcome. Children welcome.

On Sunday February 24th, historian Kevin Heskin will take us back to the days of World War II, bringing examples of his remarkable collection touching upon all aspects of the war, from all of the countries involved. He has uniforms belonging to Spanish, German, Japanese, and American soldiers. In addition, he will show the varied weapons the armies used, including swords, bayonets, gas masks, and more.

Heskin has long been fascinated with World Wars I and II. He has spent more than a decade hunting down everything he can find that memorializes these two devastating times in our history. He has previously brought many objects from his WWI collection to North Gate, and his memorabilia from the second World War is also fascinating.

North Gate will be going back to this historic time from 2 to 4 p.m. Sunday, February 24. Join us and Heskin, and relive the second “war to end all wars” as seen from different countries’ viewpoints. 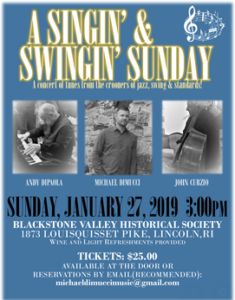 A concert of tunes from the crooners of jazz, blues and standards

The concert is to take place in the Blackstone Valley Historical Society located at 1873 Louisquisset Pike in Lincoln, RI. Tickets are $25.00 and are available at the door; however reservations via email are strongly recommended: michaeldimuccimusic@gmail.com — please provide your name, contact information and quantity of tickets needed.

A concert of timeless, classic music in a historic venue! 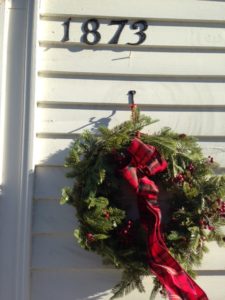 Wishing everyone a merry holiday season and a happy new year!

To keep you updated on what is happening at BVHS,  we will not have any official events in January. 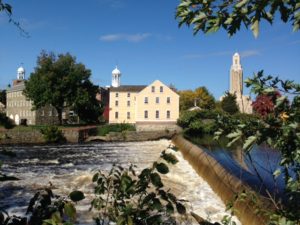 THIS TALK IS CANCELLED.  We hope to reschedule it next year. Thank you.

In American history, the Slater Mill site in Pawtucket, Rhode Island, is justifiably regarded as the inception of the Industrial Revolution in our country. Samuel Slater of Belper, England, at the age of 22, having completed an apprenticeship of six-and-one-half years in Jedediah Strutt’s cotton spinning mill, emigrated from England in September 1789 and arrived in New York that November, bringing with him a thorough knowledge of water-powered spinning machinery. This knowledge was a valuable commodity, since a handful of American manufacturers, such as Moses Brown, who saw promise in textile manufacture—producing high-quality thread and therefore cloth—had been trying, unsuccessfully, to replicate this technology in America. While Slater was New York for a period of several weeks, a ship’s captain informed  him of two men in Pawtucket, Rhode Island, who were planning to open a cotton mill.  Those men were Moses Brown of the prominent Brown family, and Brown’s son-in-law William Almy. Samuel promptly penned a letter to Moses Brown, stating that he had had oversight of and a thorough familiarity with the water-powered spinning mechanisms invented and developed by Sir Richard Arkwright.

Slater spent his first night in Pawtucket as the guest of Sylvanus Brown, who was a respected pattern maker and millwright, and eventually one of the builders of Slater Mill. The date was January 18, 1790. Sylanus Brown—-not related to Moses Brown, although both were members of the Society of Friends, that is to say, Quakers—was assigned the task of interviewing Samuel Slater. Sylvanus and his partners wished to establish just how acquainted was this young Englishman with the details of Arkwright’s spinning works. It so happened that they found in Samuel Slater the ideal candidate for their nascent mill operation. It was in Pawtucket Village, specifically a space Mr. Brown rented within Ezekiel Carpenter’s fulling mill, in December 1790, that Moses Brown, under Slater’s tutelage and in association with William Almy, Sylvanus Brown, blacksmiths and machinists Oziel Wilkinson and his son David, began the first successful cotton spinning business in America.

Drawing from the Blackstone River to provide power for their spinning frames, which was machinery based on English designs but adapted to their Rhode Island location, the “Yellow Mill” opened in 1793 as Almy, Brown and Slater Cotton Manufacturers. It was not officially titled Slater Mill during Samuel’s first decade there, but recognized as such in a colloquial sense.

The much larger and more modernized White Mill across the Blackstone along the riverbank was solely of Slater’s conception. Thereafter, the Yellow Mill would most often be referred to as Old Slater Mill. However, two years prior to Samuel Slater’s death in April 1835, Andrew Jackson, the president of the United States, visited Slater at his home in Webster, Massachusetts, where the president said to him, “Mister Slater, I regard you as the father of our American Manufacturers!” Slater’s reply was, “Yes, Sir. You could say that I wrote the psalm, and the choir has been singing to it ever since.”

Mr. Johnson has worked for Old Slater Mill Association as an interpreter and tour guide for 12 years.

Michael DiMucci, tenor and pianist, presents a concert of songs and their stories from America’s past. This program features well-known melodies from the Roaring Twenties & Jazz Age to the 1930s during the Great Depression and the beginnings of Old Hollywood to the Big Bands and crooners of the 1940s as our country approached the era of World War II.  Tickets $20 ($21.69 with service fee) are available now.  Click the link below.  We will also be selling tickets at the door.