In 1795, a gentleman by the name of Hezekiah Kent purchased a tract of land near the Reverend William Blackstone’s “Study Hill” site, just opposite the “Catholic Oak” (removed in the late 1940’s) on what is today Broad Street (across from Ann & Hope) in the Town of Cumberland.   On this land, Hezekiah and his wife erected a house and barn (the house remains and is on the rise of land on the south corner of Broad and Blackstone Streets).

As farming was a seasonal occupation, Hezekiah soon added a workshop where he could fabricate shoes to generate extra income when farming chores were less demanding.  The workshop was small (abt. 13 x 18 feet) and stood on a fieldstone foundation.  The building’s frame was pegged-post and beam in construction, with broad side and roof boards fastened with primitive hand forged nails.  Tax records indicate Hezekiah Kent still owned the house and outbuildings on Broad Street in 1874.  At that time, the homestead was valued at $1,800.00.

Around 1867 Joseph Jenks Arnold and his wife purchased the John Newell grocery at Valley Falls, where they continued the operation for about seven months.  Sometime during 1868 they moved to a tiny cottage near the Kents where they continued to operate a small provisions store.  By 1875, Hezekiah’s little workshop lay idle, and Joseph Jenks Arnold approached him with a business proposition.  The Arnolds had been selling home-baked bread from their store, but needed more than a home kitchen to meet customer demand.  Mr. Arnold offered to pay rent for use of the workshop and installed an oven for making bread and other baked goods. 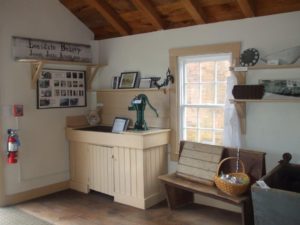 Initially, Mr. Arnold personally carried the bread and other baked goods and sold them door to door.  Early Valley residents welcomed the convenience of the time and effort saved by the delivery of fresh breads to their doorstep, and by 1877 Mr. Arnold employed a full time baker to help keep up with demand.  It was obvious they needed more room to expand, and the Arnolds moved to the booming mill village of Saylesville in the Town of Lincoln around 1878.  There they built a new and much larger bakery on Chapel Street, as well as their family homes.

By the 1890’s they had eight employees who were baking bread and making deliveries full time.  By 1906 the business was incorporated as the Lonsdale Bakery Company with Mr. Joseph Jenks Arnold as its first President, and employment had grown to 20.  The new bakery was enlarged with a brick addition in 1915, and by that time, the Arnolds were employing 50 people in their baking and delivery operations.

When Joseph Jenks Arnold passed away in 1932, his son, Ernest Jenks Arnold, succeeded his father as president of the “Arnold’s” Lonsdale Bakery Company.  During this period there began a decline in textile activity in the Valley, and many mills were selling off mill housing and real estate not essential to production.  The Lonsdale Company (owners of several textile mills as well as extensive land holdings in the Lonsdale area) – now the owner of the old wooden bakery – was no exception. 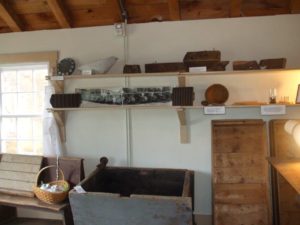 For nostalgic reasons Ernest Jenks Arnold, in 1935, acquired the building, moved it from Cumberland and had the building set on a new concrete foundation next to the new brick bakery on Chapel Street.  He then restored the building, painted the clapboard siding a bright red (the bakery was originally yellow) and moved his family’s collection of early bakery artifacts into the relocated structure.

Ernest J. Arnold Obituary  August 1970:
… At its peak, it employed 160 persons and marketed 150 types of baked goods.  Some years ago, the company ended its routes and individual drivers took them up as contractors, and now operate them with the trucks still bearing the Arnold name.  … leaves a son, Dana R. Arnold of Lincoln, President and Treasurer of the bakery.

Thus, we assume the bakery was still operating in 1970.  For how much longer is the question.

Dana died in 1976, and we have no record of when the bakery ceased operations. 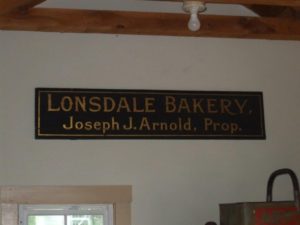 By 1991, the little original bakery had fallen into serious disrepair.  Private citizens, civic groups and others undertook efforts to save the building.  Unfortunately, no mutual agreement was reached on how to accomplish this goal.

In 1997, with only one month left before the construction of a new post office on the former site of the brick bakery, the Blackstone Valley Historical Society, with the assistance of the Town of Lincoln, and cooperating property owners, was able to take possession.  The building was dismantled, and reconstructed – using as much of the original material as possible – on  the property of the BVHS, next to North Gate (the Toll House for The Pike; then the Lime Rock Grange and now the home of the Society) and the Lime Rock No. 22 Fire Station.

The executive board and membership of the BVHS wished to preserve the early bakery building for a number of reasons.  Not the least of which was the fact that the Arnold Family with its long history of providing quality baked goods in the 19th and 20th centuries had more than a passing impact on the lives of Blackstone Valley residents on both sides of the river.  And, there are very few examples of early workshops which have survived to this day.

All of the above information came from various sources, in which was found conflicting dates as to when and where various events took place.  Thus, the writings are as accurate as we were able to determine.  This update of the history of the bakery was done by Gail Harris, director and member-at-large of BVHS.

The post office was never built and today the area where the brick bakery stood is now a park.

The following are the entries on the Arnold family from 1908 Edition of RI Representative Men & Old Families, with additional notes added by Gail Harris, which she gathered from the censuses and other records.

Joseph Jenks Arnold was born Oct. 14, 1844 in Smithfield, R.I., now the town of Lincoln.  He received his education in the common schools of his native town, and at the village of Lonsdale, leaving the same when eighteen years of age.  The following year he spent at home, engaged in assisting with the work on the home farm.  He then became a clerk in the general store at Lonsdale, conducted by Baylies B. Bowen, and remained in that capacity about five years.  Then, in 1867, Mr. Arnold purchased the John Newell grocery, at Valley Falls, where he continued for about seven months, at the end of that time removing the business to Lonsdale, where he was located until 1877.  He then closed out the establishment, and coming to Saylesville engaged in the baking business, in which he has since continued, having met with marked success.  From a small beginning, with one wagon, the business has grown to the extent that fourteen wagons are now used, supplying a trade covering a radius of ten miles.  On Sept. 12, 1906, the business was incorporated as the Lonsdale Bakery Company, with J. J. Arnold as president; Frederick W. Arnold as secretary, and E. J. Arnold as treasurer and manager.  Mr. Arnold’s enviable business standing he has won on his own merits, and in the management of his business and the treatment of his patrons he has been unquestionably straightforward and honorable.

Mr. Arnold has devoted his entire time to the extensive business he has built up in the forty years of his active career, and has had no aspirations for public honors.

He is a Republican on political questions, and in religious connection is a member of the Lonsdale Episcopal Church, to which his wife also belongs. Mrs. Arnold takes an active part in the work of the church, and is a member of the King’s Daughters and the Ladies’ Auxiliary.

On June 26, 1866, Mr. Arnold was united in marriage to Mary Alice Whittle, who was born March 1, 1846, in Johnston, R.I., daughter of James and Ann (Thornley) Whittle, of Saylesville, R.I.  Mr. Whittle was a bleacher, and had mills in Providence and East Greenwich, R.I.

This union has been blessed with children as follows:

William Edmund Arnold, born Aug. 20, 1867, in Lincoln, R.I., received his early education in the public schools of Lincoln and Cumberland, supplementing same with a year’s course at Bryant & Stratton’s Business College, Providence, which he left when seventeen years of age.  After leaving school he went to work for his father in the bakery, and for several years was the acting manager of the business.

In September, 1904, Mr. Arnold purchased the H. Greene & Co. grocery and bakery at Lonsdale, which he has since successfully conducted.  He is a member of Unity Lodge. No. 34, A.F. & A. M. of Lonsdale.  He holds membership in the Saylesville Memorial Congregational Church.  In politics he is a Republican, but has never sought office.  He married Oct. 28, 1892, Hannah E. Wilkinson, of Saylesville, and to this union have been born five children, Lloyd Wilkinson (deceased), Raymond Jenks, Clifton Whittle, Walter Bennett and Muriel.

Frederick W. Arnold, born Feb. 12, 1870, in Lincoln, R.I., attended the schools of his native town, and since leaving school has been associated with his father in the bakery.  He married Mary McFadden, of Lonsdale, and they have three children:  Milton Earle, Helen Jenks and Joseph Jenks.

Ernest Jenks Arnold, born Oct. 6, 1875, in Lincoln, R.I., received his schooling in his native town, and then entered the employ of his father.  For the past several years he has been manager of his father’s extensive business.  He was married Oct. 4, 1899, to Edna Robbins, of Pawtucket, R.I., and this union has been blessed with two children, Joseph Jenks and Dana Robbins.  Mr. Arnold is a member of Barney Merry Lodge, No. 29, A.F. & A. M. of Pawtucket.

Edmund Bowdoin Arnold  (Brother of Joseph Jenks Arnold), born Jan. 17, 1846, in the town of Smithfield, now Lincoln.  He received his early training in the public schools of his native town and the Lonsdale grammar school.  Leaving school at the age of seventeen years, he became an apprentice to the machinist’s trade at the Collyer Machine Company, Pawtucket, and as an employe of the same remained five years.  He then became a clerk for his brother, Joseph J., in the latter’s grocery at Valley Falls, after which he took up farming on the homestead farm, in which occupation he has since continued, having seventy-five acres of land, which he keeps well cultivated.  Mr. Arnold is a member of the American
Mechanics of Pawtucket.  He attends the Episcopal Church.  In his political views his is a Republican, and he has served his native town as constable for two years.  He is unmarried.

Notes are not part of the original article in the RI Representative publication.   These dates have been added as reference points.

3 thoughts on “The Arnold’s Lonsdale Bakery”