Have you ever held a newspaper from 1924? How about taken a pair of scissors to its delicately yellowed edges carving out historical

articles to be archived? This is exactly what the members of the BVHS did at the first ever clipping bee held at the Buckley Building at the North Gate House on December third. Members gathered together to sift through a treasure trove of accumulated newspapers to begin categorizing these valuable pieces of history. Clipped papers were piled into boxes labeled Lincoln, Pawtucket, Woonsocket, Central Falls, Cumberland and North Smithfield. Within two hours each box was overflowing with articles about historical buildings, famous people, the government, community happenings, and geographical events.

While turning the pages and searching for pertinent historical information in newspapers collected and stored for preservation purposes, it became evident that history was alive and well in this former Limerock fire station.

“Should we keep this article?”

“What do you think about this article?”

It was a wonderful time for sharing stories found and brought to light after years of storage in cardboard boxes. It was a, “Look what I found”, kind of night.

Many laughs were shared over photos reflecting childhood memories and the way “things used to be”. Even an advertisement for Arnold’s bakery was found amongst the clutter of clippings. The bakery originated its business in Cumberland and the building itself was eventually dismantled stone by stone and rebuilt beside the North Gate House on Louisquisset Pike, the very property we were on at that moment. It made for a wondrous night of stories and learning.

Buildings have been restored, torn down, and faces change, and people move on. But the stories stay the same for that moment in time. Capturing that moment and experiencing its magic with members who may even remember it firsthand makes for a memorable evening indeed. 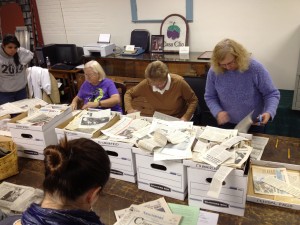