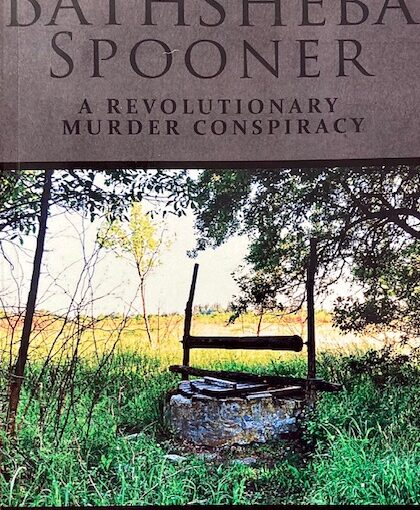 What possessed a woman from the elite of eighteenth-century New England society to conspire with American and British soldiers to murder her husband at the midpoint of the American Revolution? The story of Bathsheba Spooner has alternately fascinated and baffled residents of Worcester County for centuries. Beyond central Massachusetts, the tale is largely unknown. It was, in fact, the most sensational “true crime” tragedy of the American 1700’s.

Bathsheba Ruggles Spooner (1746 – 1778)was the first woman in American history to be executed  following the Declaration of independence.

Spooner was the daughter of a leading Tory lawyer Timothy Ruggles, who served several terms in the Massachusetts House of Representatives before the Revolution, and after the Revolution settled in Nova Scotia.  Bathsheba had an arranged marriage to wealthy farmer Joshua Spooner in Worcester and remained in Massachusetts. After becoming pregnant by her lover, 17-year old Continental soldier Ezra Ross, she enlisted the assistance of Ross and two others to murder her husband. On the night of March 1, 1778, Spooner was beaten to death and his body hidden in a well. Bathsheba and the three conspirators were soon arrested, tried, and convicted of Spooner’s murder, and sentenced to death.  She was buried in an unmarked grave in Green Hill Park in Worcester.

Andrew Noone became interested in Spooner when he realized that his house was adjacent to Green Hill Park where Spooner was buried.  He became fascinated with the story, and began to research the murder and trial.

Andrew Noone, the author of the book, is an independent scholar with graduate degrees in art history and musicology from Syracuse University. He was music specialist in the Worcester Public Schools and has taught courses in the humanities at several colleges in Massachusetts, including Clark University.