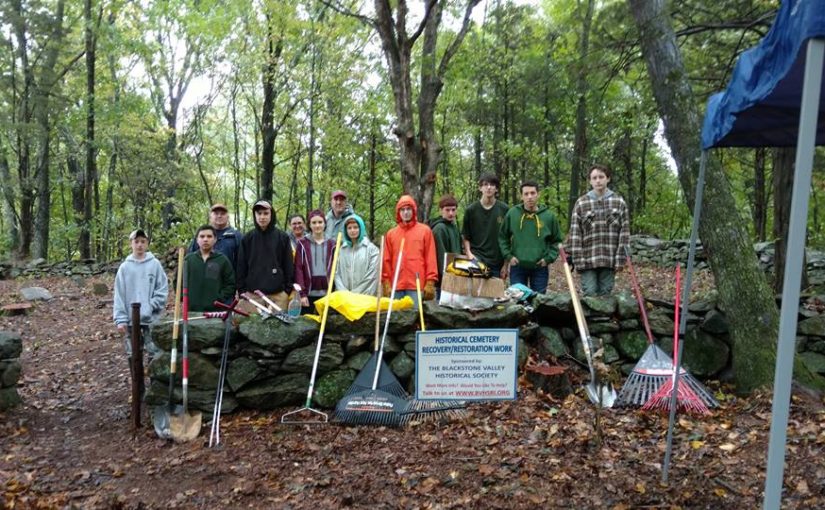 All photos are courtesy of Ken Postle’s facebook site, River Road, Blackstone River and Canal Cemeteries.  There are many more! Ken has also been working on Chapel Street, on the Mineral Spring Avenue cemetery, and on NP01 near Intervale Avenue in North Providence.  He has also been working with the Cumberland High School students at historical cemetery CU33  near Kimball St. in Cumberland.  Here is one of Ken’s posts on the Wilbur Lot cleanup.

October 2: “John Houghton and I met up with the Scout Troop 711 and Day 3 was just as exciting as Day 1 and 2-It started with more raking off, more foot stone discoveries, field stone finds and continued into restoring original line alignments of shoved and toppled bases and ended up with an incredible boring out of a previously degraded base back into functionality again…We ended the day with an incredible assessment of 28 marked burials and 5 hollows (as yet no stones), where previously only 22 known burials were indicated and that number will probably get bigger as the cleared Lot weathers…We ended the day honoring the Rev War Vet (Christopher Wilbur) with a new flag, salute and moment of silence-Thank you Drew, Brian McMahon and Troop 711 for an incredible display of team work and dedication to restoring history!”