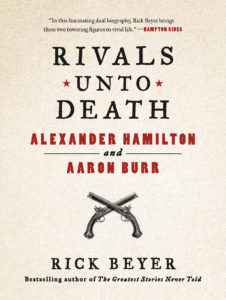 It is the most famous duel in American history. But what prompted the sitting Vice President of the United and the former Treasury Secretary to settle their differences with guns blazing? Rick Beyer, author of Rivals Unto Death, exploores their intricate thirty-year rivalry that led to their deadly encounter, following them through battlefields, courtrooms, bedrooms (!) and arguably the wildest presidential election in history — all the way to their day of destiny in Weekhawken New Jersey.

Rick Beyer is a New York Times best-selling author and an award-winning documentary filmmaker. His most recent book, Rivals Unto Death, is a compelling new account of the Hamilton-Burr rivalry. Beyer co-authored (with Elizabeth Sayles) The Ghost Army of World War II, a New York Times bestseller, and produced the companion PBS documentary. He has also made films for The History Channel, A&E, and National Geographic and penned the popular Greatest Stories Never Told series of history books. A graduate of Dartmouth College, he lives in Chicago, Il.

One thought on “Rivals Unto Death: Rick Beyer Talks about Hamilton and Burr”