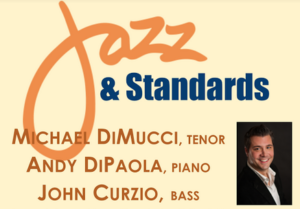 A concert of some of the most important and influential American songs and jazz standards from the early 20th century, including the most popular and enduring songs from the 1920s to the  1950s that were created for Broadway theatre, musical theatre, and Hollywood musical films. Light refreshments.

Tickets $20.00 Tickets are available at the door, but reservations by email are recommended: michaeldimuccimusic@gmail.com.