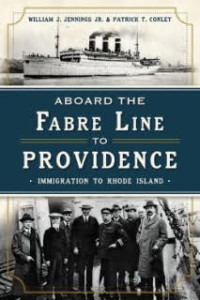 William Jennings  will talk about the subject of his book, Aboard the Fabre Line to Providence: Immigration to Rhode Island, co-authored with Patrick. E. Conley.

Books will be available for purchase at the talk. This presentation is free, all are welcome. Donations are gratefully accepted.

Acute congestion at the port of New York during the early decades of the 20th century resulted in the Fabre Line, a French-registered transatlantic steamship company catering to immigrant transport, choosing Providence as a port of call for its steamers between the years 1911 to 1934. At that time Providence was experiencing a renewed maritime vigor. During its calls there the Fabre Line landed nearly 84,000 aliens at Rhode Island’s capital city, 11,000 of which chose Rhode Island as their permanent place of abode. The two largest immigrant groups to debark at Providence during Fabre’s years were the Portuguese and Italians; however, many others came from various countries around the Mediterranean basin. Immigrants were the mainstay of the line, as was passenger traffic.

Immediately before the outbreak of the First World War, the Fabre Line took off with a boom only to have the conflict dampen its business and its futureexpectations. Yet the line held on, and the initial postwar years were the company’s best at Providence. Then came the national immigration restriction acts of 1921 and 1924 which presented the line with a serious challenge. Seeking to hold on to passenger traffic, Fabre ships began the practice of sending its vessels to various ports in the eastern Mediterranean and the Black Sea, along with its traditional calls at Italy, Portugal, and the Azores, in order to fill its passenger manifests. Also, in an endeavor to offset the loss of human traffic, the line sought to increase cargo handling at the port as well as making a vigorous effort to promote tourist business. The line was unsuccessful in each of these latter efforts. When the Great Depression of the 1930s deepened, the Fabre Line quit the port of Providence without recognition or announcement on July 4, 1934. The days of transatlantic glory at Providence came to an abrupt termination.

The Fabre story involves tales of Providence and the state making serious efforts to keep Fabre at the port, Fabre’s friction with the New Haven Railroad, whose dock the line used during it’s initial years at Providence, the perils of transatlantic travel during the war years, the immigrant experience upon landing and the fine efforts of those who assisted them when they arrived, and the line’s attempt to beef up cargo handling and promote tourist traffic at the port in an effort to bolster the losses from sagging immigrant traffic.

Many Rhode Islanders, and those residing in Southern New England, can trace the experiences of their intrepid ancestors journey to the “promised land” of America on the Fabre Line during those early years of the twentieth century.