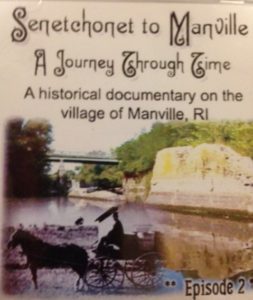 January 14, 2018 BVHS will be showing Part 1 of  “Senechonet to Manville: A Journey Through Time,” a historical commentary on the village of Manville, RI, by Betty and Carlo Mencucci, with many photographs and other material collected by Roger Gladu. The movie covers the growth of Manville from colonial times, and ends with the spectacular disasters of the 20th century: the 1924 house gas explosion on Cumberland Hill, the 1920s textile strikes, the 1927 flood, the 1938 hurricane, and the flood and fire in 1955. Free Event.

January 21, 2018 BVHS will be showing Part 2 of “Senechonet to Manville: A Journey Through Time,” a historical commentary on the village of Manville, RI, by Betty and Carlo Mencucci, with many photographs and other material collected by Roger Gladu. Highlights of this movie include the stories of many Manville businesses through time, Manville in wartime, and much more. Popcorn available. Free event.

BVHS’s exciting exhibit on the Lime Kilns of Lime Rock. If you live in Lime Rock, you may be familiar with these mysterious stone structures, but maybe not. Most of them are hard to see, even though you may drive past them often.  This exhibit exhibit on the kilns walked through seven sites that are part of Lime Rock’s history. Mining and processing lime was nearly a continuous industry in Lime Rock from 17th century until nearly the 21st century (the Conklin Lime Quarry). This exhibit also featured small exhibits from the collections of Jim and Danny Bethel.

A talk by Jim Ignasher,  Smithfield historian. “How did the creation of Smithfield’s first airport in 1932 ultimately change the course of WWII in the Pacific? And have you ever heard about the bizarre air battle that took place over Boston? Or what became of a fighter pilot who mysteriously vanished from formation while on a routine training flight over Connecticut?” On March 18, local writer and historian Jim Ignasher will tell these and other little-known tales relating to New England Aviation. Free event.

BVHS was happy to welcome Rick Beyer, author and documentary filmmaker,  to tell us about his research on the Ghost Army, the WWII deception unit.  This event is free, all are welco

BVHS’s annual Tour of Cogswell Tower led by Bob Ferri, Central Falls City Councilman. Meet at the entrance to Jenks Park on 580 Broad St, Central Falls, 02863.  Climb to the top of the tower, and go underneath the Tower to see the Grotto. Free!

BHVS’s exhibit An Elaborate History: The Cumberland Ballous was on display in the Cumberland Public Library for the month of July.

October 20, 2018,  The Corpse That Drove a Hearse – and Other True Tales of the Macabre, Jim Ignasher, Smithfield Historical Society

A Halloween presentation by Jim Ignasher, Smithfield Historical Society. In this talk, he discusses the Victorian fear of being buried alive, cases of re-animation, and the steps some tried to take to avoid such a fate. Then there were those who actually made a living at being buried alive. It includes stories relating to “points of law” beyond the grave, and finishes with a bizarre love story. The talk is oriented for adults.

Michael DiMucci, tenor and pianist, presents a concert of songs and their stories from America’s past. This program features well-known melodies from the Roaring Twenties & Jazz Age to the 1930s during the Great Depression and the beginnings of Old Hollywood to the Big Bands and crooners of the 1940s as our country approached the era of World War II.