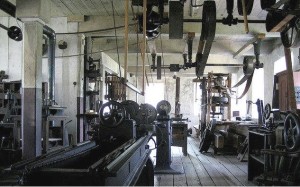 We live with such modern technology all around us that we often forget there had to be a beginning to it all.  Believe it or not, some of the earliest technology came out of the Blackstone Valley region.  Richard Langlois will take us on a tour of this region, and introduce us to some of the early inventions that made for today’s modern living.  Also, as President of the Blackstone Valley Amateur Radio Club, Richard will introduce us to ham radio and how it still is an important part of today’s technology.

Richard Langlois, Ph.D., is President and Chief Physicist at Langlois Lab, which specializes in Business System Analysis, Industrial Research and Design, and Data Acquisition.  Dr. Langlois, who received his Ph.D. in Electrical Engineering and Physics from Massachusetts Institute of Technology, has been associated with ham radio for over thirty years.  He also has been credited with several inventions, including a non-ferrous electromagnet.

Composers such as Billy Joel, George Gershwin, Cole Porter, Duke Ellington and Jason Robert Brown rounded out this eclectic program of love songs for your Valentine.

Michael DiMucci studied piano with the late Chester Fruscione of Trenton, New Jersey and further at the Westminster Conservatory of Music in Princeton, NJ where he also studied pipe organ.  Mr. DiMucci has played at several RI venues for special events as well as his own concerts and recitals such as Linden Place, Blithewold Mansion, Mount Hope Farm, The Dunes Club and others. As a singer, Mr. DiMucci apprenticed at Boheme Opera in Trenton, NJ for two seasons with Maestro Joseph Pucciatti and currently studies voice with RI baritone and Artistic Director of Opera Providence, Rene de la Garza. He has performed throughout the New England area in large and small venues for concerts, private recitals, special events and weddings and was a regular guest artist at the University of Rhode Island’s Opera Workshop. There Mr. DiMucci performed many lead tenor roles including Tamino in The Magic Flute; Nanki-Poo in the Mikado; Ralph Rackstraw in H.M.S. Pinafore; Rinuccio in Gianni Schicchi and Matt/Larry in Face On The Barroom Floor. Mr. DiMucci also performs in concerts and recitals for Opera Providence as a guest singer.  Because of his diverse musical background, Michael is at home singing Broadway/Musical Theatre, Opera, classical literature, as well as jazz and the American Songbook.

Mr. Marshall is a 1998 graduate of Berklee College of Music with a B.S. in Music Education and a 2010 graduate of American International College with a M.Ed in School Administration. For the past nine years he held the position of Director of Music for the Swansea Public School System in nearby Swansea, Massachusetts. In addition to that position, he was also the director of The Joseph Case High School “Cardinals” Marching Band, Concert Band, Jazz Ensemble, Chorus and Show Choir. Under his direction, these instrumental and vocal performing ensembles excelled and earned numerous group and individual awards at festivals and competitions throughout Massachusetts, as well as in New York City, Washington D.C. and Allentown, PA. 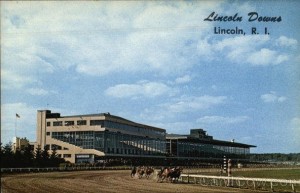 When you go to Twin River nowadays, you might forget that this part of Lincoln has been through several changes, but, if you look around the property, you might catch glimpses of the original, Lincoln Downs, which still is there, in both spirit and buildings.  For those of us who remember going to “The Track” and watching the incredible beauty of thoroughbred racing, it may still be in the blood, although those days have been gone for quite a while.  But, it’s not forgotten by many, some of the “regulars,” and others who worked for Lincoln Downs.

One of those is Bob Kynch.  He started working at Lincoln Downs as a teenager, cleaning stalls and walking the horses seven days a week.  He also went down the road to Narragansett Park in Pawtucket, working for both tracks until they closed.  But, he has continued to keep the days of Lincoln and Narragansett in the minds of Rhode Islanders, and on Sunday afternoon, March 9th, Bob will bring part of those days to North Gate.  With souvenirs and memoirs, he will bring us back to the golden days of thoroughbred racing in Rhode Island. Also, others who were a part of the Lincoln community will be there to assist Bob in bringing back this historical period.

Bob also will let you in on another of his projects: A movie based on the Lincoln Downs days.  In fact, if there are any of the audience present who might have memories or memoirs of those days, please come and share.  This program is sure to be a wonderful walk down Memory Lane for those of us who remember Lincoln Downs, and a fantastic introduction to the beauty of horse racing for those who might not have been a part of the “Track” in its heyday.

May 18, 2014: Central Falls Ephemera from the Collection of Dan Bethel 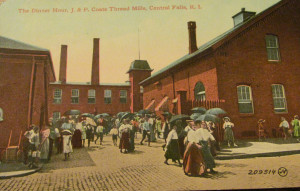 Dan Bethel, Lincoln resident and noted collector of Blackstone Valley ephemera, showcases his collection of Central Falls memorabilia and some of his new acquisitions.

This is a view from a postcard labeled “The Dinner Hour, J&P Coats Thread Mills, Central Falls, RI.” 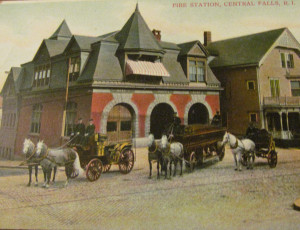 May 18, 2014: Christine Nowak Lecture, Kevin McBride, University of Connecticut and the Mashantucket Pequot Museum, Results of the Archaeological Investigation into the 2nd Battle of Nipsachuck Swamp, North Smithfield, RI.

Return to Cogswell Tower: On July 23, Bob Ferri led a group of about 20 people on a tour of Cogswell Tower, from the clock at the top to the grotto beneath. 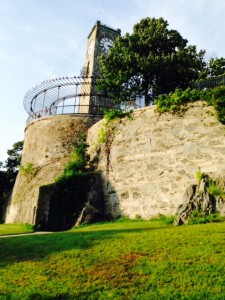