January 27th, 2013: Historian Joe Puleo went back to the 1st Automobile in the Blackstone Valley 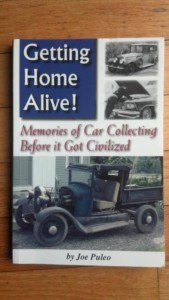 The automobile is now an integral part of our lives, but when did this relationship really come to light? Join Historian Joe Puleo as we go back in time to the first cars in the Blackstone Valley, and relive the first ten years of major automotive living.

Previously, Mr. Puleo came to North Gate with stories of the Rhode Island Militia. A prolific writer, he has penned
many articles on the Militia, and has also written a book entitled Getting Home Alive. . .Stories of Car Collecting Before It Got Civilized, an introduction to early automobile collecting and the pitfalls involved in acquiring and fixing up some of the older models.
He will have copies available for purchase, with part of the proceeds to go to the Historical Society. Also, do you have pictures and stories of your first car, or with your parents or grandparents riding in their early autos? Bring them, both the pictures and the family members, with you, and share in the memories of driving in the Valley. It is hoped this program can become one of audience participation, with many of you recapturing your early driving experiences.

Hope you joined the fun of early motoring in the Blackstone Valley!

March 3, 2013: Scott Molloy gave a spirited talk about the history of Mass Transit and the changes it brought about. 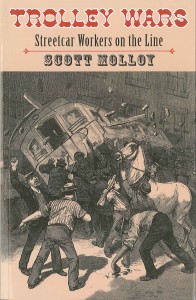 American cities’ rapid transportation systems– omnibuses, horse car, and, later, electric streetcars. Trolley Wars traces the social dynamics of these first mass-transportation systems as they developed in Rhode Island, the most urbanized state in Gilded Age America. Covering years of rapid growth, Scott Molloy focuses on the laborers who operated the transit system, the changing ownership of the streetcar lines, and the strong bond that grew between trolley crews and passengers–a bond that sustained a powerful political alliance during the bitter “car wars” of 1902.

Scott Molloy received his Ph.D. in American History from Providence College in 1991.  He is currently a Professor at URI, teaching history and labor relations.  He founded the RI Labor History Society in 1988, and has been inducted into the Rhode Island Hall of Fame.  He also spent many years as a RIPTA bus driver and labor official.

In 1887, an independent horsecar operation in Woonsocket initiated trolley service, the first of its kind in New England.  The line only lasted a few months due to technical difficulties and some community opposition, but if it had maintained service for a year or so it might have made claim to being America’s first electric streetcar operation.  (from p.64, Trolley Wars: Streetcar workers on the Line.)

April 21, 2013: Saylesville Ephemera from the Collection of Dan Bethel

On April 21st, in the downstairs hall, consummate collector Dan Bethel once again regaled us with his unbelievable memorabilia. This time, he concentrated on the village of Saylesville, a part of Lincoln. As usual, his amount of materials was  incredible: post cards, documents, any type of materials dedicated to this small area of a significant part of our Blackstone Valley. For years, the Blackstone Valley Historical Society has been the fortunate organization that Dan has allowed to view his collections. It was a pleasure to once again be able to walk down a part of our region’s Memory Lane.

An “exaggeration” postcard from Saylesville, RI (about 1908) 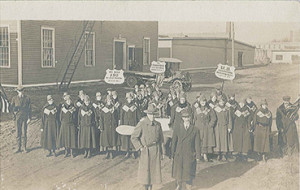 A postcard showing the U.S. Aircraft Fabric Inspection Station in Saylesville, RI during World War I. Note the women workers and the propeller in the middle of the picture. 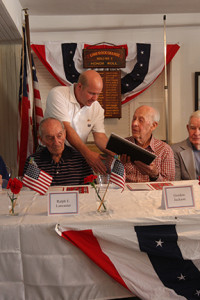 Lime Rock Grange Honor Roll members were acknowledged for their service in a lovely ceremony.

Michele Jeffrey and Esther Guadagni dazzled the audience with their 40’s songs.
Esther was a teenager during the War II and worked full time while attending high school – she truly was a member of the GREAT GENERATION 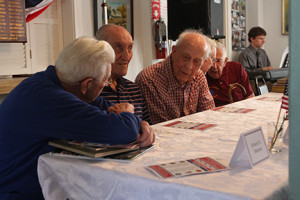 We all went  back in time to the era of Swing music and danced at the Old Canteen! 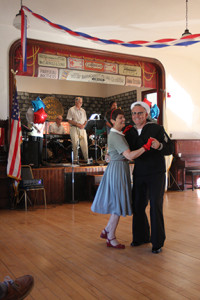 The BVHS is hosted a 1940’s Canteen Party in honor of local Veterans and Grange Honor Roll members.

The event featured swing music by the Reggie Centracchio Quintet.

Families of honored veterans shared that the event sparked in their loved ones a new, and in some cases, never before experienced willingness to share war experiences and stories.  We are so pleased to hear this, as it is the best outcome of this event we could imagine: opening the locked archives of personal experience!

The BVHS embarked on its first FIELD TRIP on August 4th to visit the Fall River Historical Society’s Lizzie Borden exhibit on the 121th anniversary of the murders. We had a great time! 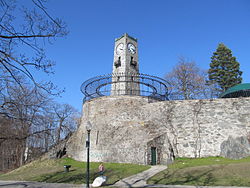 BVHS enjoyed its first annual tour of Cogswell Tower at Jenks Park in Central Falls, hosted by Bob Ferri.   For more information about the Tower, see